BDC Round 2 - My first competition!!

So, after almost 5 years of drifting anything from 60bhp Volvo's to 460bhp Nissan's, i finally felt ready to step over to the other side of UK drifting.... competitions!

I'm no stranger to the BDC (British Drift Championship), i worked for them for almost 3 years so i had a good understanding of how things worked but now i would be seeing things from a whole new perspective, as a driver! 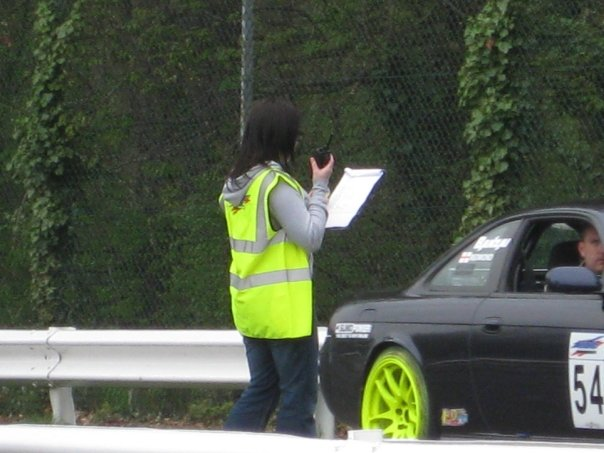 With help from my sponsors RS Repairs, Mint Tyres Motorsport and Carbon Copy UK I've been able to get my Nissan S14 ready for BDC but not only that, I'm a strong believer that seat time is the key to being a good driver and so i visited Santa Pod, Norfolk Arena and Lydden Hill a few times earlier this year to practise in all conditions. 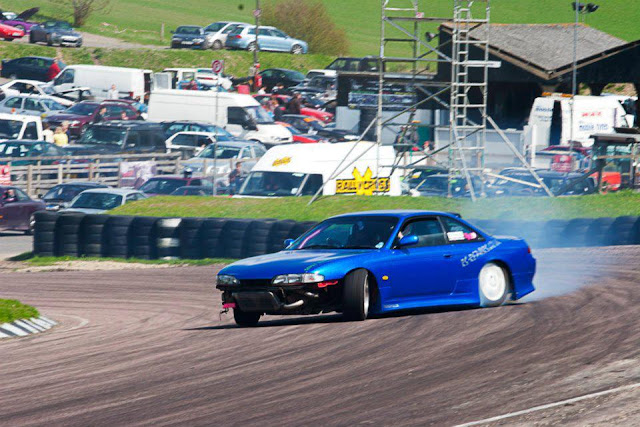 Thursday 31st May snuck up on me all too quickly and before i knew it i was giving the S14 a once over before starting my long and noisy journey to Norfolk Arena for Round 2 of the BDC. A lot of people trailer their drift cars to events nowadays, personally i prefer to drive mine (although i may think differently after the drive to Teesside later this month!) 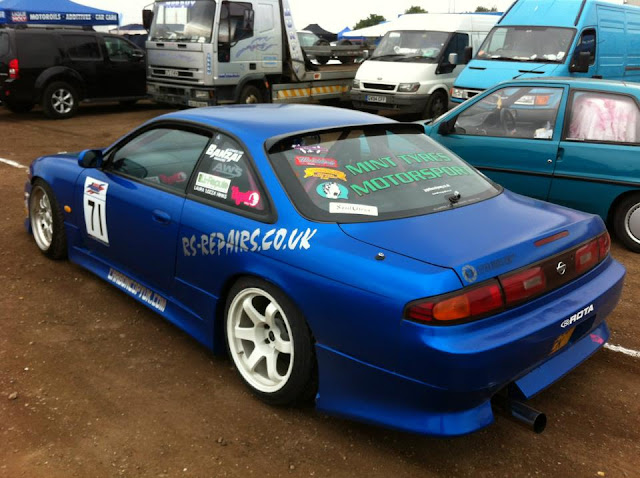 I arrived at Norfolk Arena on Thursday evening to be greeted by the awesomely dedicated Norfolk Drift Team who run all drift events at the stadium as well as sort out the rabble of BDC drivers at every round.

After a good nights kip i turned up to Norfolk Arena bright and early ready for signing on and the drivers briefing at 8:15am, I've been to a lot of drivers briefings over the last few years but this is the first one i actually really listened to!!! 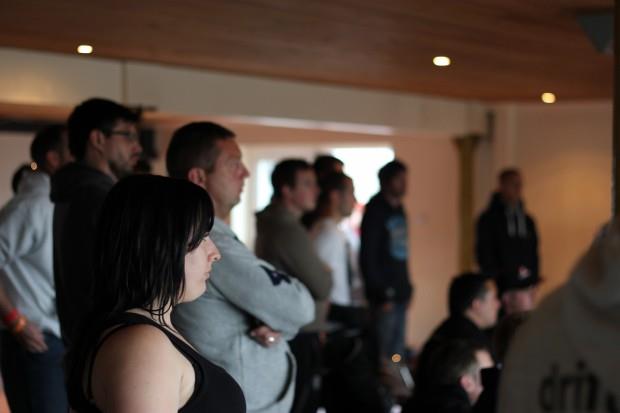 Practise started and unfortunately i made an amateur mistake when setting my tyre pressures and ran the same pressures that i normally do... with part worns! I learnt very quickly that brand new Federal 595 EVO's are a fair bit more grippy than part worns!!

Unfortunately this meant that my first session of practise was pretty much a waste of time, nevertheless i still had the second practise session and so i raised the tyre pressures and set my rear coilovers a bit harder and all was good - it's all about the set up! 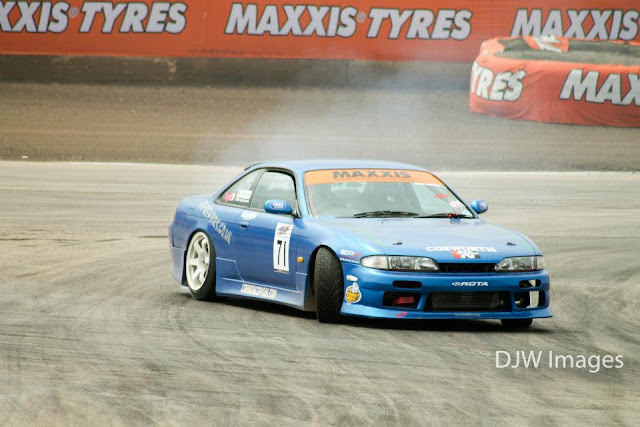 I managed to get about 8 laps in before it was time for qualifying, just enough time to get used to the track layout and surface.

Now, I'll be honest i had pretty massive butterflies in my stomach whilst queueing up for my judged runs but i got on the start line, gave Malx the thumbs up and went for it. At this point i must just say that Malx is the best start line marshall anyone could hope for and was probably the reason i didn't screw up my qualifying runs. 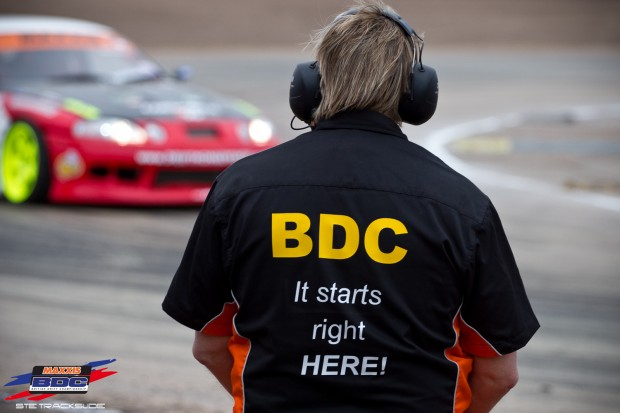 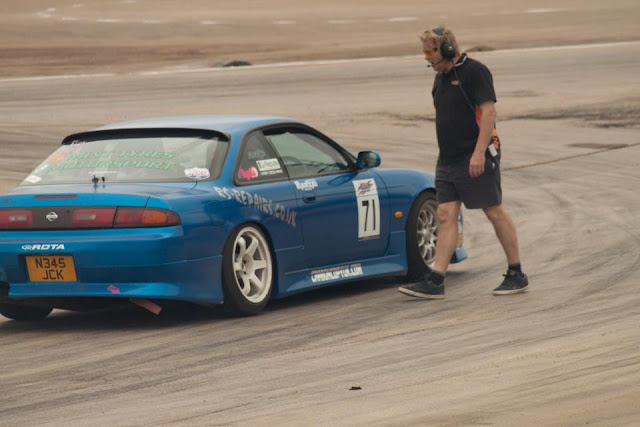 So, how did my qualifying runs go??? Pretty good!
I stuck to the rule of; Run 1, keep it safe, Run 2, go a bit harder, Run 3, go all out and it worked kind of! My first two runs were consistent, almost thought i was going to take a clipping point with me, so i guess i did pretty well on front clips! Run 3 i went as fast as i could and did a lame half spin but it's always worth the risk! 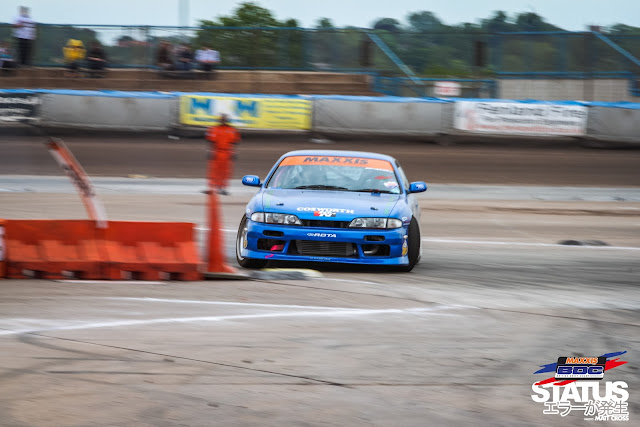 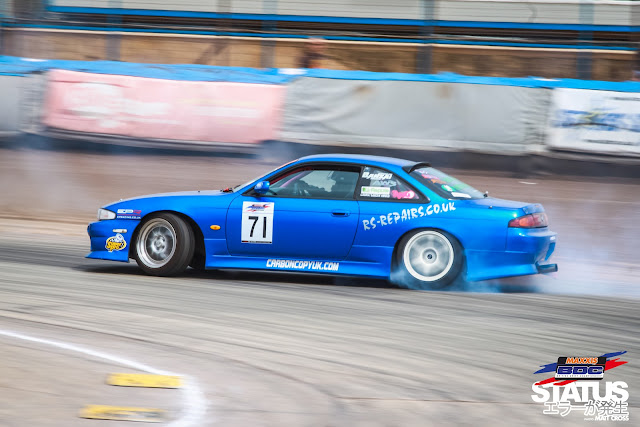 My first run scored 62 points, the second run was 59 and the third was 50. The 62 point run put me through into 15th place in the Semi Professional class of which i was over the moon with! I really wasn't expecting to qualify at all in my first competition. 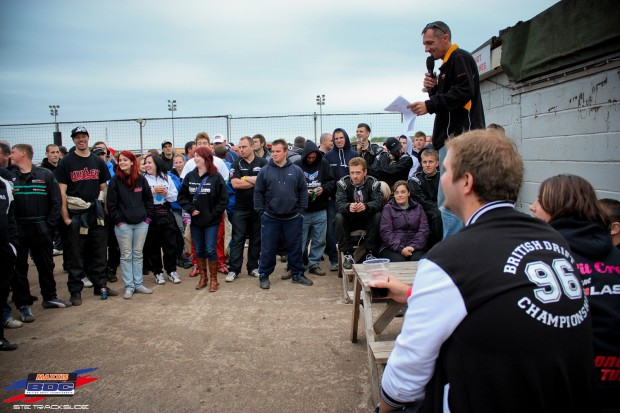 On to the Saturday, we all got a well needed lie in! The wonderful thing about Norfolk Arena, we don't have time constraints which meant the event could run into the night. I had loads of fun in the practise sessions, learning to chase and keep up with the other drivers was great.

A quick briefing had the judges explain exactly what they were looking for in the twin battles, they wanted to see people taking the qualifying line, hitting the two rear clips and two front clips however the chase car line could be sacrificed if they were within 5 metres of the lead car. 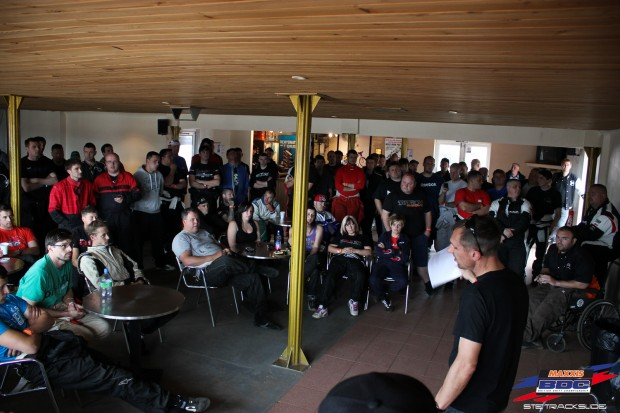 So we all got lined up and organised by the wonderful Minnie of the Norfolk Drift Team, whilst we were waiting i met my opponent, Brian Egan from Team Dealtwidth and had a look around his impressive Toyota Corolla AE86 powered by a S2000 F20c engine!! At this point i was realising that i would have to drive as well as i possibly could to even keep up with him.

His car being approximately 270bhp and very light, whilst my lardy s14 is only running just above standard power (200bhp).

Check out his page on facebook for more info: Dealtwidth 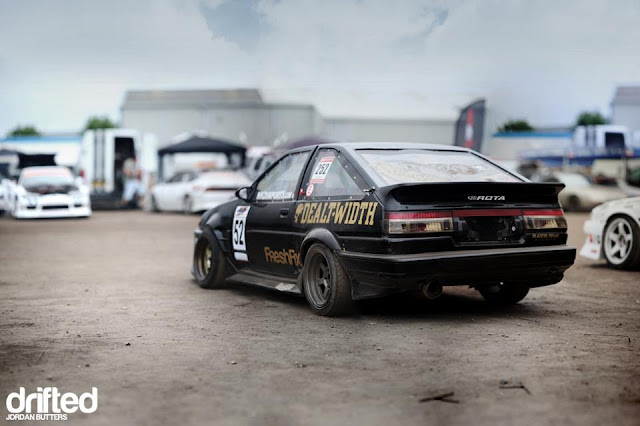 Our practise run was pretty good, unfortunately on our first judged run with me following i tried just a little bit too hard to keep up, i went offline and onto the shale which then made me spin. At this point i knew he was definitely going to win but wanted to put a good run in anyway.

We returned to the start line, this time with me leading and we both put in a good solid run, couldn't help but giggle to myself going over the finish line as i could hear the F20c engine roaring behind me - I'm a sucker for a sweet sounding engine.

So, that was my first BDC competition experience over, i sat with friends and watched the rest of the Semi Pro, Pro and Super Pro battles with a smile on my face..... and that's what it's all about... having fun! 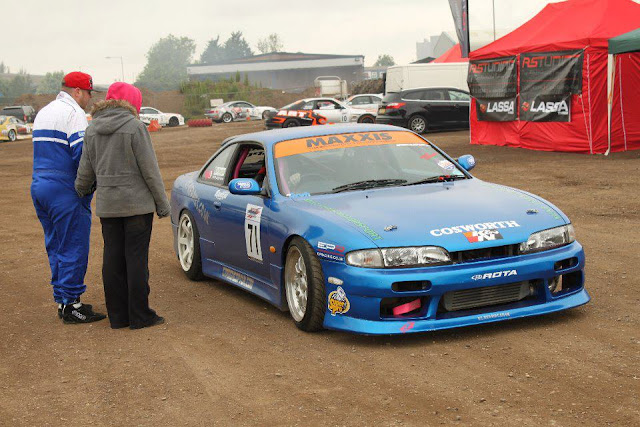 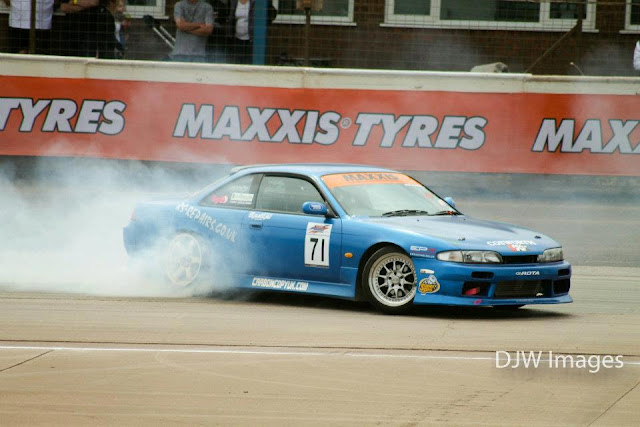 If you're not smiling then you're doing something wrong! :)

Recently I've been working really hard to turn my S14 from a daily drifter to a competition car with the intentions of competing in the 2012 season of the BDC and sometimes it's just nice to look back and see how far you've come with a project.

So, here we go! In June 2009 i picked up an almost standard red S14 off Pete Barber, the only uprated parts being KYB Shocks, Tein springs, a 3" exhaust and a set of Advan 3 spoke rims.

The day i picked it up i drove it straight to the garage for a fresh MOT and of course to weld the diff! A couple of days later i was drifting at the Japshow drift demo at Santa Pod.

Two months later i treated the car to some nice posh coilovers, HSD HR's from Driftworks.

From then on i did mostly aesthetic changes, painted the splitters etc and just generally made it look a bit better.

After my time living in the Isle of Man, i moved back to the UK and also got the S14 some new wheels!! They were 15" x 8j et -8 Rockcrawler wheels off a Jeep and seemed to draw a lot of attention! 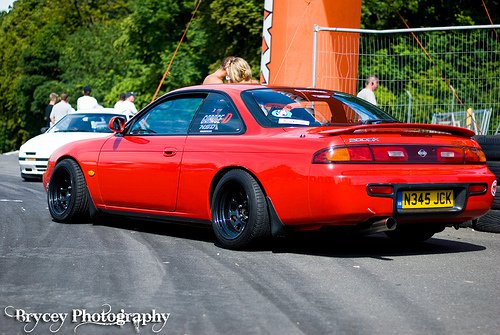 Next up was a replacement exhaust as mine came flying off mid drift lol a nice cheap replacement which actually looked pretty awesome, at the same time i replaced the downpipe with a twin superlow one from Japspeed to help with clearance! 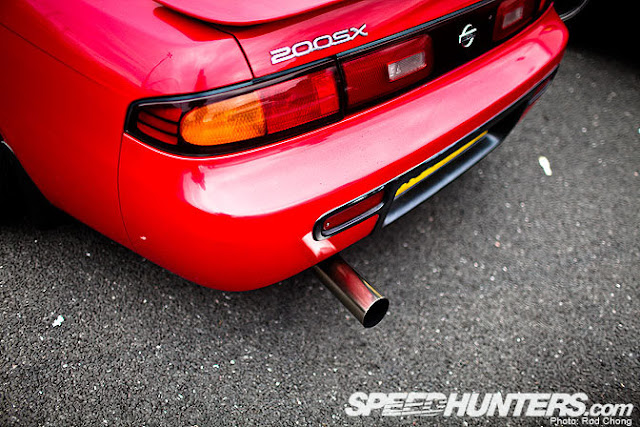 I also removed the rear interior and fitted a Thrash racing bucket seat and Willans harness.

Of course in between there was plenty of drifting at various tracks, Santa pod, Norfolk Arena etc 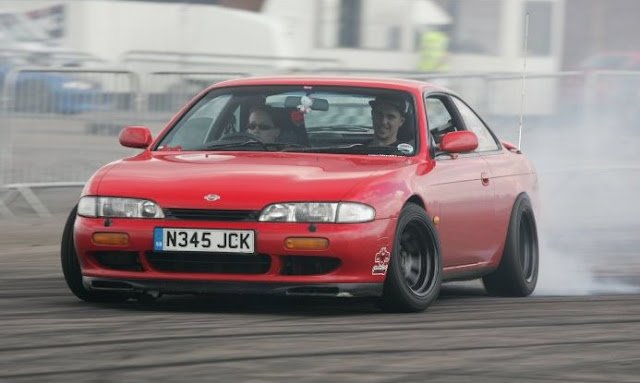 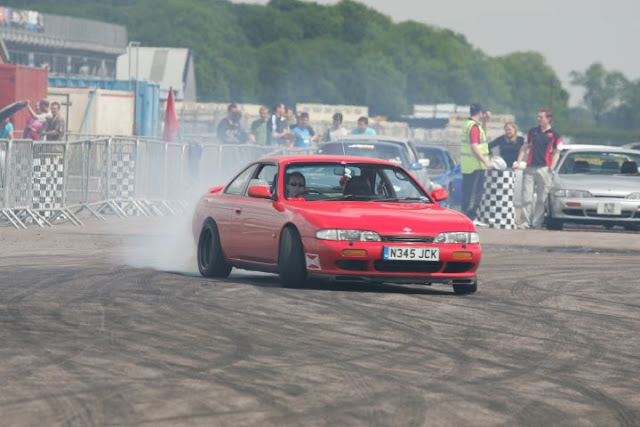 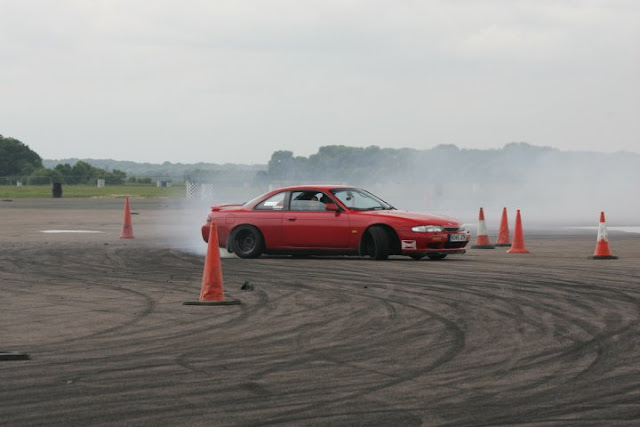 Did some arch flaring with Arch Enemy to squeeze the pokey wheels under the arches!

In December 2010 i officially became a team member of the Mint Tyres Drift team and also gained sponsorship from Carbon Copy Japanese Bodykits. The car was then fitted with a roof spoiler from SRB Power, Blitz Type 01's 17" wheels and some sponsorship stickers. 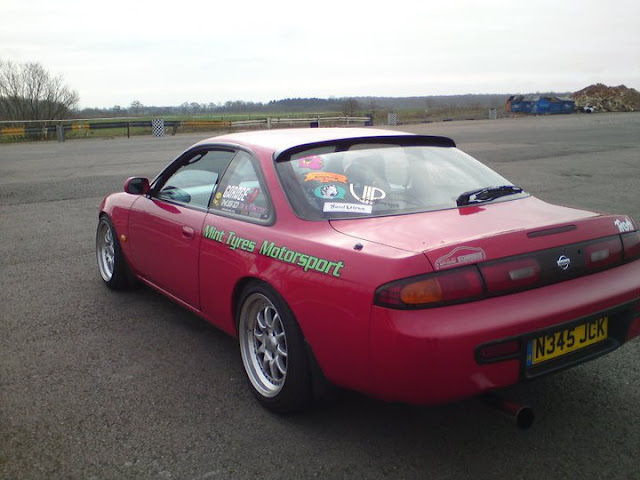 I tested the car out at Mallory park in May 2011 and really started to notice the improvements i was making, the 4:1 diff by far being the best modification and helping me to use 3rd gear more. 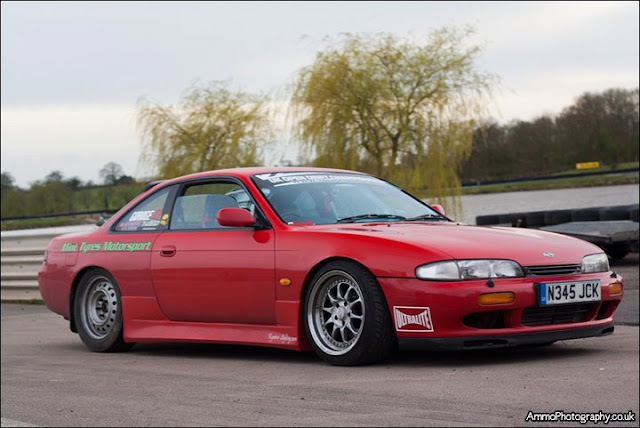 In May 2011 i was pleased to announce a new sponsorship deal with RS Repairs in Wellingborough, RS Repairs will continue to be involved throughout the 2012 season. I also then collected a full Vertex bodykit from Carbon Copy which started to transform the look of the car.

I decided a change of colour was in order and actually decided to have the car vinyl wrapped by Craig and Precision Drift Clothing, i wasn't familiar with the process of vinyl wrapping a car but Craig did an amazing job and the result was awesome! 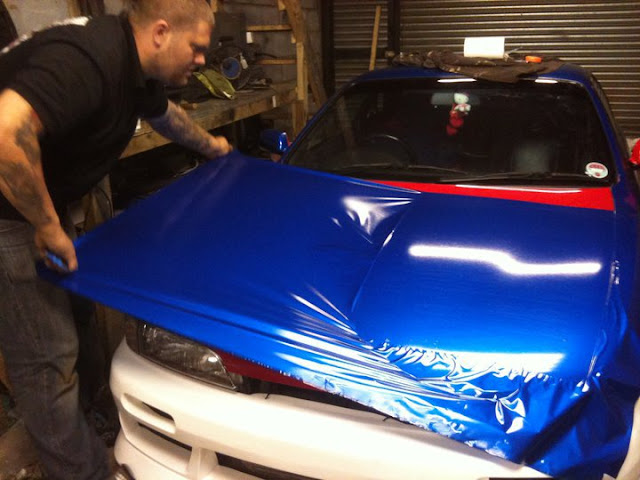 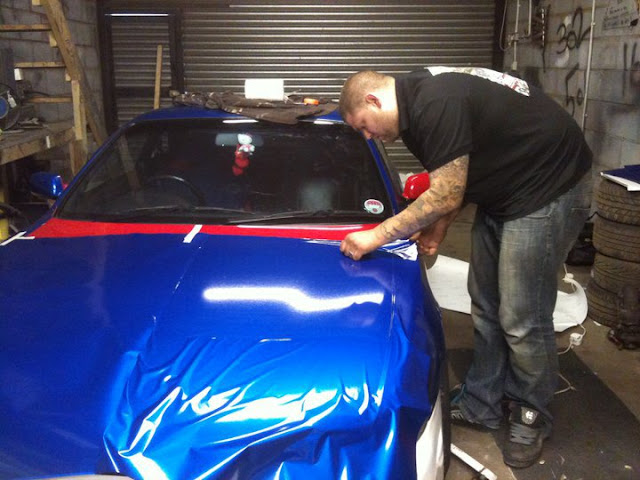 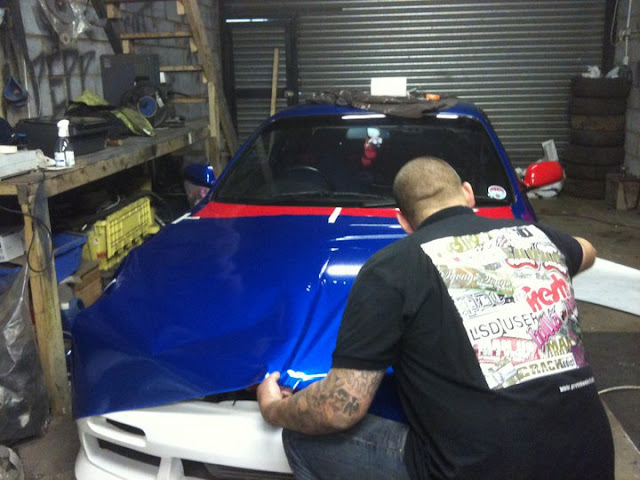 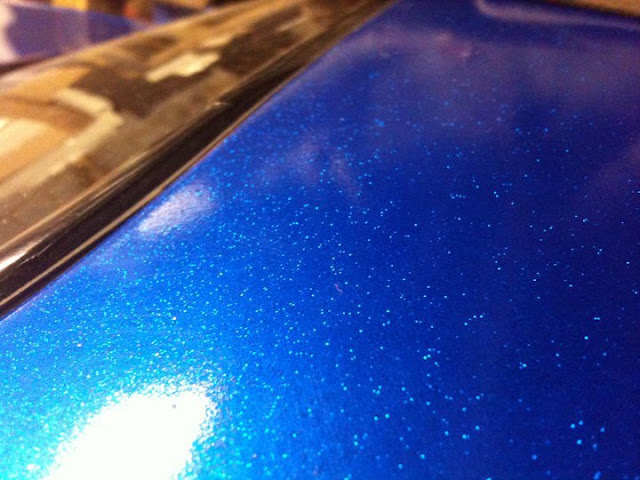 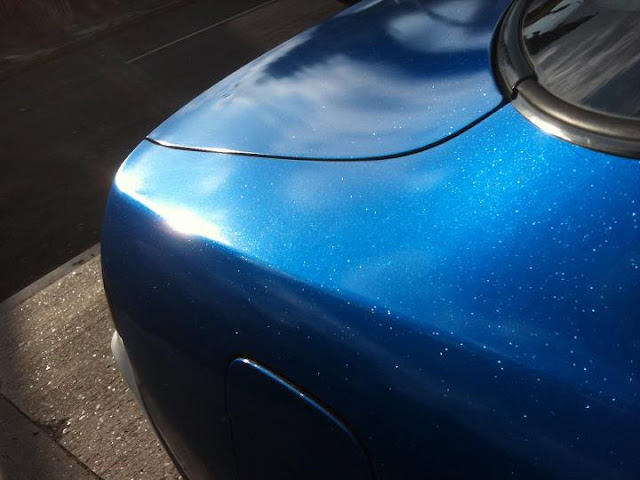 I was really impressed with the skill it took to apply massive sheets of vinyl on his own and the quality finish could never be had for the same money if you were to paint a sparkly colour like i have.

Since vinyl wrapping the car it receives a lot of attention not only from drifters but from all car enthusiasts so i took the car to two photo shoots and got some cracking shots. 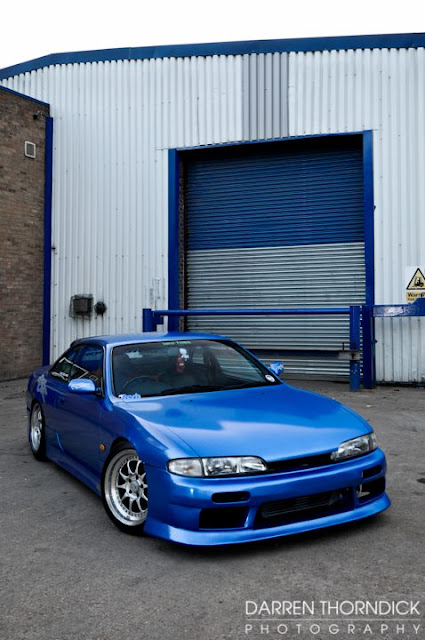 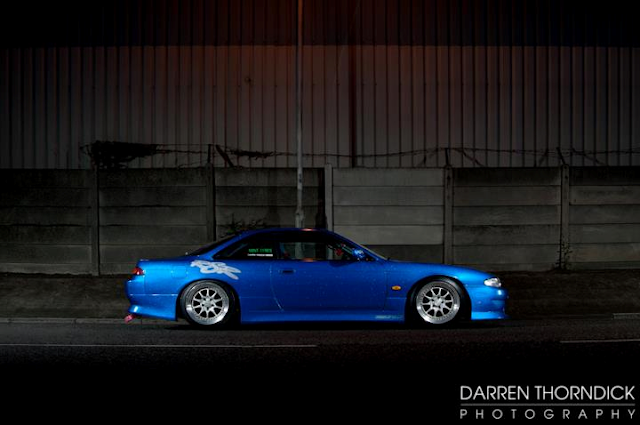 In June 2011 i was over the moon to be awarded my BDC Semi Pro license at Donnington, giving me lots of enthusiasm to get the car up to spec for the 2012 season.

I also attended Awesomefest 2011 at Mallory Park, my first outing with the new colour and unfortunately my last until now!

I have a lot more updates coming soon and I'm looking forward to a new challenge and improving as much as i can in 2012!

Posted by Lozza No comments:

Email ThisBlogThis!Share to TwitterShare to FacebookShare to Pinterest
Older Posts Home
Subscribe to: Posts (Atom)
Welcome to my blog!
My name is Laura but im known to most as Lozza.
I've been drifting since 2007 and now i've decided to start documenting what i get up to in the world of drifting.
You may also see a couple of blogs containing my first love... rallying!